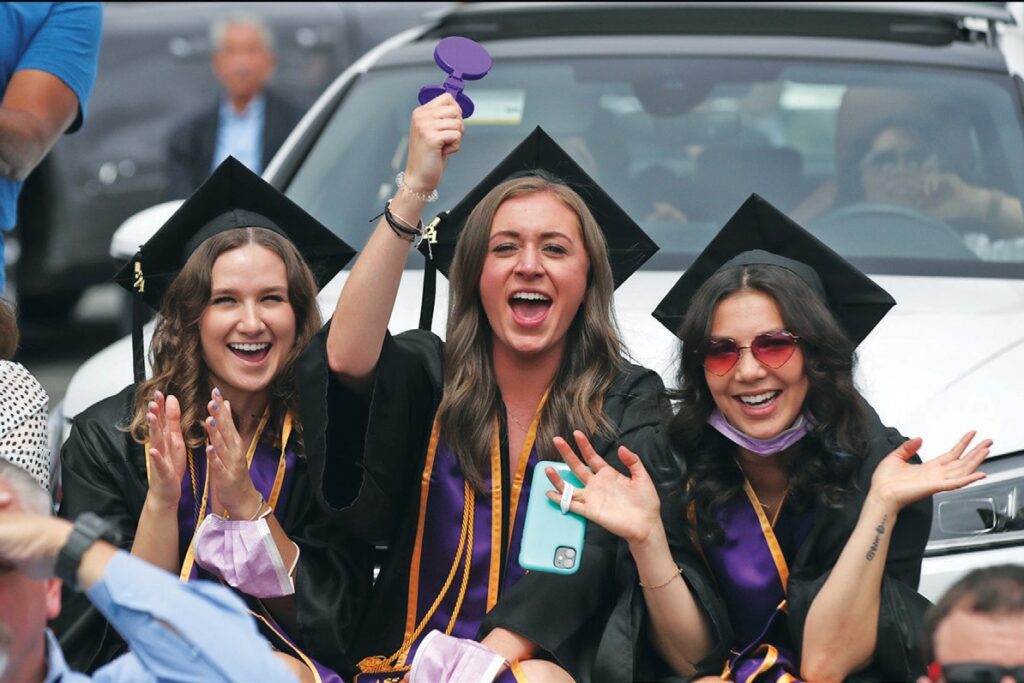 THREE CHEERS—Cal Lutheran University recently moved the location of May’s commencement ceremonies from the Ventura County Fairgrounds, where they were held in 2021, back to the campus. Acorn file photo

After 2.5 years of dealing with extraordinary circumstances due to the pandemic, the Cal Lutheran University Class of 2022 just wanted something traditional— finally—for graduation. The university has agreed to give it to them.

This week, CLU announced it would change the location of May’s commencement ceremonies from the Ventura County Fairgrounds, where they were held in 2021, to the traditional home at William Rolland Stadium on the Thousand Oaks campus.

The university’s graduation committee, made up of administrators and staff members but no students, began planning this year’s ceremonies in June 2021, at a time when COVID numbers were still elevated. With uncertainty about what the future might hold in terms of the pandemic, they wanted to secure a location big enough to allow for a safe, in-person ceremony.

“We are still living in a world impacted by the ever-changing landscape of COVID-19,” said Leanne Neilson, CLU provost and vice president for academic affairs in an early March email to students. “While we hope the impact of the virus will continue to only decrease between now and commencement, only time will tell.

“Amidst the uncertainty, the fairgrounds provide us with the space and flexibility to ensure that we can host a face-to-face ceremony that accommodates several thousand attendees.”

While the graduation committee had sought feedback from last year’s graduates regarding their experience at the fairgrounds, members had not reached out to the Class of 2022.

But eventually, the committee heard from them.

Only a few members of the class and their parents reached out at first, but then one graduating liberal studies and education major, with the help and encouragement of a couple of friends, began an online petition asking the CLU administration to host the ceremonies on campus.

“From classes occurring virtually over Zoom to mask mandates, new protocols, and missing two years of being on campus, we have overcome an exponential amount of struggles throughout our time at California Lutheran University,” wrote 22-year-old Madi Wells on the posted petition.

Within just a few days of the Feb. 27 posting, nearly 1,000 people had signed, with that amount having more than doubled by this week.

“This was just after our (university) president (Lori Varlotta) had her inauguration on campus and the mask mandates were going to be lifted, so we didn’t understand why she could do that and we couldn’t have our graduation,” Wells told the Acorn. “We posted the petition—figuring if nothing comes of it, at least we would have been heard—but then I could not believe how many people were signing it.”

Between the phone calls, emails and petition, the graduation committee became aware that some students were unhappy with the idea of holding the ceremonies 30 miles from campus.

Josh Gatison, president of the Associated Students of California Lutheran University Government, said he could appreciate both the desire to move the ceremony off-campus as well as to bring it back and has heard students voice preference for each. More so, he’s admired the willingness of the various sides to discuss the options.

“I’ve been very appreciative of how the administration on campus has been open to listening to students,” Gatison said. “We’ve met with them a few times as well as the people who’ve organized the petition . . . and overall, it’s been a good communication line between both parties.”

Of the 40 student government leaders who voted, 27 preferred having the ceremony at home, 12 favored keeping it at the fairgrounds and one person abstained. With results in hand, the university administration approved a new time and place for graduation.

The ceremonies will be held Sat., May 14 Rowland Stadium in Thousand Oaks..

Graduate degrees and degrees for professional students receiving bachelor’s degrees will be handed out at a ceremony beginning at 9 a.m., and traditional undergraduate students’ ceremony will begin at 1:30 p.m.

“When we saw that the majority of student leaders wanted this change, we figured out a way to make it happen,” Neilson said. “We want Commencement to be the best experience possible for our graduates.”

For updated graduation information and details on commencement procedures, go to callutheran.edu/commencement.